Congratulations to Leslie Wilson, an NJCU undergraduate majoring in Security Studies, for being selected as a project intern in summer 2020. Good luck with your next steps! Please see below for some of her research and analysis.

Interfering with Foreign Elections is Nothing New.

The United States of America attempted to interfere with 81 foreign elections, and Russia attempted to interfere 36 times between 1946 to 2000, according to an election database constructed by political scientist Dr. Don H. Levin (Agrawal, 2016). Therefore, it should come as no surprise when twelve Russian hackers were indicted for intervening with the 2016 U.S. Presidential election. By releasing private emails from the Democratic National Committee, the Russian Federation’s main choice candidate was clear: Republican nominee Donald Trump.

“He is a bright and talented person without any doubt. He is the absolute leader of the US presidential race,” Vladimir Putin, on Donald Trump, Dec. 17. 2015.

According to an ICA (Intelligence Community Assessment) report, produced by the CIA, FBI, and NSA, Russian president Vladimir Putin intentionally elevated the win of Trump’s election “… by discrediting Secretary Clinton and publicly contrasting her unfavorably to him.” (Office of the Director of National Intelligence, pg.ii).

• They saw Trump’s presidency as a form “… to achieve an international counterterrorism coalition against the Islamic State in Iraq and the Levant (ISIL)” (Office of the Director of National Intelligence, pg.1)

• They wanted to prevent Hillary Clinton from winning the election due to incidents involving her influence to incite protests under Putin’s regime, along with Putin’s personal grudge over comments made towards him.

Evidence collected by the CIA, FBI, and NSA, to demonstrate Putin and Russian officials’ affinity with Trump include:

• Immediately halting public criticisms surrounding unfairness of the US election process after the 2016 presidential election (Office of the Director of National Intelligence, pg. 1).

• Having a history of working closely with former business tycoons turned political leaders who are “… more disposed to deal with Russia, such as former Italian Prime Minister Silvio Berlusconi…” (Office of the Director of National Intelligence, pg. 1).

• Publicly supporting Trump through comments released in the press, for example Putin responding positively to Trump’s stated campaign stance on Russia-US relations (Office of the Director of National Intelligence, pg. 1). 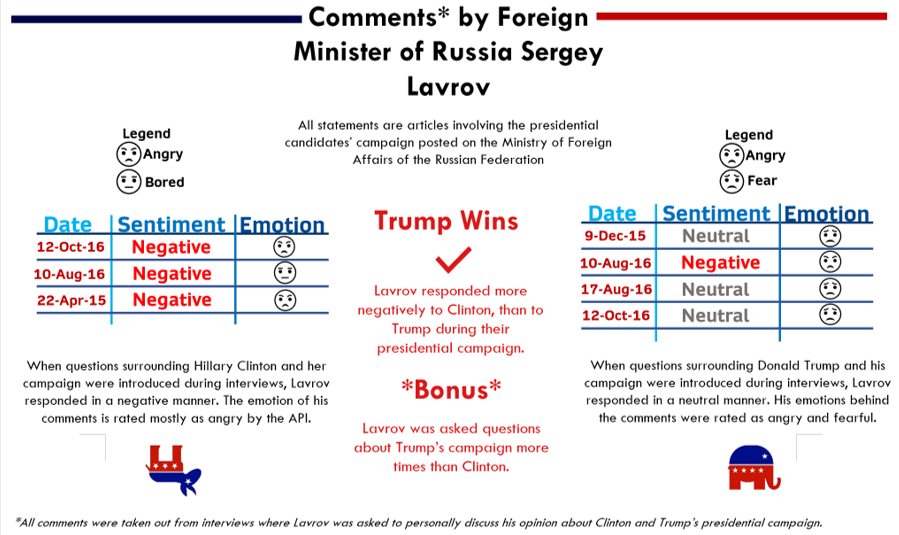